My mom had to go to Anaheim for a charity conference. Because her hotel was at the Anaheim conference center, which is across the street from Disneyland, my dad, sister and I invited ourselves to crash her hotel room.

It was just like old times, all four of us squeezed into one room. The room was actually surprisingly big, which is probably the only positive thing I have to say about the hotel, and we were not too over-crowded, even though there were four adults in the room.

Other than the size of the room, which as I mentioned was very good, the hotel sucked. We stayed at the Marriott Anaheim. In all other respects the hotel varied from disappointing to down right outrageous. The worst parts of the hotel were the miserably tiny pool area, then fact they wanted to charge you for EVERYTHING ($9 to use the gym for an hour or $14 to use it for one day, $3 each way for the shuttle to Disneyland, fees to get a fridge in the room, etc), the lobby was so dark it was like nighttime, miserable angry people at reception and the air conditioning controller in the room was broken so the room was always about 60 degrees.

Enough about the shitty hotel.

The vacation was great. Friday during the day my Dad and I went to the La Brea Tar Pits and in the evening we met Katy in Hermosa Beach. The tar pits are a lot more interesting than they sound. The tar is very pretty and bubbly, and the Page Museum, while small, has mammoth bones! Who doesn’t love mammoths?

In Hermosa, first we went and sat around at a rooftop bar drinking beers and enjoying the lovely view. Later we went for a short walk up and down the beach and then went to a delicious tapas restaurant for dinner.

This was the view. Not bad. 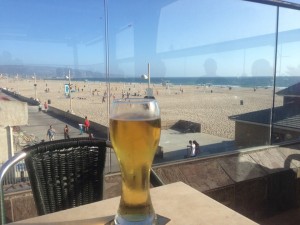 Saturday my Dad, sister and I spent the entire day at Disneyland. We were there from opening at 8AM to closing at midnight. This was also my Dad’s birthday, so he got to spend an awesome birthday at the happiest place on Earth!

He seemed to have a great time, which made Katy and I very happy. Disneyland was unbelievably crowded, but Katy and I worked together and we were able to ride lots and lots of rides. Katy downloaded an app telling her the line times for different rides and which ones were open or shut-down. Using this app, she would send me to go to fast passes for the most popular rides while she and my dad hung around in shops or waited in other lines. I went alone to get the fast passes because my dad is notoriously slow and we would have wasted many good hours walking across the park just to get passes.

The fact that the app told us which rides were open and closed was an extra awesome feature. One of my dad’s favorite rides is Big Thunder Mountain Railroad. When we first got to the park that ride was closed, but around mid-day the ride opened. Katy noticed this and we were able to go over there and stand in a relatively short line. The ride was only open for a few hours before it was shut down again for the remainder of the day. I strongly recommend getting the Disneyland app if you have a smart phone.

I am very happy that my Dad has such a great birthday. He was turning 66, which is a big birthday, and I love to see him happy. I am a little behind on updating and it has now been several weeks since we were there, but my dad is still talking about how great his birthday was. 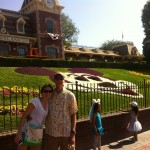 At Entrance to Disneyland 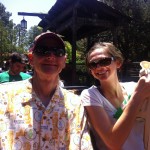 About to Ride The Thunder Mountain Railroad! 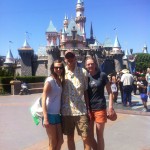