Thanks to the help of some wonderful friends and family we got 47 vines planted this weekend. The planting went really well. We had one set of two guys running the single person post-hole digger (which had a good bit and worked wonderfully this time). We then had two teams of two people planting the vines, and finally one person with a bucket going around and watering the new plantings with a mixture of H2O and vitamin B12.

The B12 is important. You are supposed to let the dormant vines soak in a combination of water and B12 for 12 to 24 hours prior to planting. This wakes up the dormant plants. Once the vines are in the ground, you add the same mixture to help them establish themselves.

Once the plants were in the ground, we covered each one in a blue grow tube. It might not look too pretty, but the tubes should protect the plants from critters and should amplify blue light which increases beneficial photosynthetically active radiation. 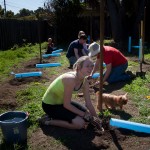 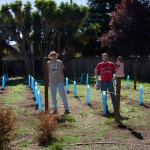 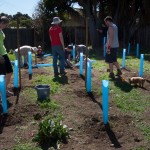 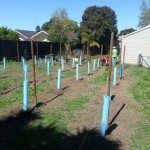