My super smart and thoughtful sister gave my dad and her fiancé Evan tickets to the Thanksgiving Day Cowboys football game for their birthdays this year. My dad turned 65 and Evan 30, so this was a great gift to honor such big milestones. In addition, she asked all my family members if they wanted to join, and in the end she got a total of 12 people saying yes! Well, it is now Thanksgiving and we are all in Texas.

My family and I flew down to Big D on Tuesday. That night we stayed at Stanis’ (mom’s sister), and Katy and Evan showed up a few hours later. They are on month number 5 of vacation and have spent the last 2.5 months driving around the US. It was great to see them. I miss Katy so much. They have one more month of travel and then will end up back in Palo Alto for good.

That first night we just hung out at Stanis’ for an easy evening. There were 14 of us: me, my parents, Katy and Evan, Stanis and Uncle Bob, cousin Duffy her husband Shann and their two kids, and my cousin Robby and his two girls. It was lots of people and lots of fun.

Wednesday we took the morning easy. In the afternoon we drove to Denton. We got lunch at the Smiling Moose Deli. It is a chain but very tasty. I would have preferred going to a local place, but this was still very good.

After lunch we went to the cute little Denton town square. It looks like a perfect old timey town square out of a movie, and it is where Evers Hardware, my family’s 100+ year old hardware store, was. The hardware store has been gone for several years now, but we still have the awesome old building. My aunt Celia gave us a tour of the area and we ended at a new tequila bar that was recently installed in our old warehouse behind the Evers Hard 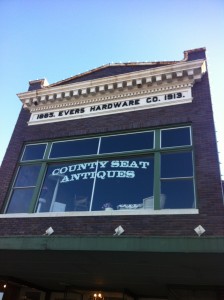 After our tour of down town Denton, we went back to Celia’s house. My mom and the rest of her side of the family eventually showed up and Uncle Mike bbqed cheeseburgers for everyone. Since we had lunch at 3, I was not hungry so I ust nibbled on some baked beans and drank a few beers. After dinner there was lots of chatting and we played Left, Right, Center and the adults played Cards Against Humanity. I love that game but playing with your parents is uncomfortable. My dad is a good guy but still, having to say things like smegma and jizz in front of him leaves me feeling like a horrible person.

We ended the night early and everyone was in bed by 11 because the next day was Thanksgiving and Cowboys Football!!!

Thursday morning we got going early. Showered, breakfasted, packed pick-necking supplies and were on the road by 10. We left early because we were afraid that all the tailgating spots would be filled. Our concerns turned out to be baseless. When we arrived in Arlington, there was hardly anyone there. It was also 5 hours until kickoff, so that might have had something to do with the empty parking lots.

For the next several hours we tailgated: drinking beer, eating deviled eggs and sandwiches and enjoying watching the parade of dressed up Cowboys and Raider fans pass by. It was chilly but Evan made delicious homemade cider and spiked it with Everclear, so that kept us warm. 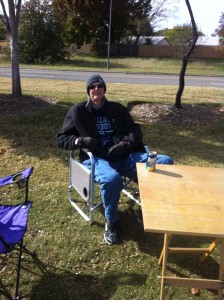 After we were fed, we went into the stadium. It was quite the party. Dallas Cowboys Stadium looks like a spaceship and is as impressive as it is hyped up to be. Silver and shiny and housing the worlds largest flat screen tv, it is big and flashy just like you expect a Texas monument to be.

Katy & I In Front of Jerry Town 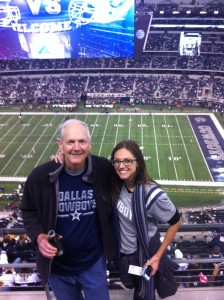 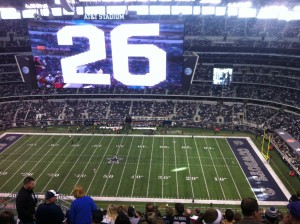 World’s Biggest TV – it is HUGE

Before the game, my dad and I enjoyed a Fletcher’s Corn Dog. These are the original hot dog on a sticks, invented at the state fair of Texas. It was tasty and way over priced, to be expected of stadium food, and made my dad very happy.

The football game was great fun. It started off looking like the Cowboys were going to go down in flames; they fumbled the kickoff and the Raiders scored (thus we were down by 7 points within 3 to 5 seconds into the game). It was pathetic. The Cowboys managed to score and then the Raiders scored twice more, giving them a 14 point lead. Then right before halftime the Cowboys had an excellent drive down the field, allowing them to score and bringing with difference within one touchdown.

The half time show was a performance by someone called Selena Gomez. I believe she is a teen pop star. We had no interest in the show and spent half time walking around and buying over priced beers.

The second half of the game was very exciting. The Boys managed to take the lead and hold onto it. Woohoo! A Cowboys win and a happy Thanksgiving for all.

Friday, while the rest of the crazy world was out fighting each other over Black Friday deals on toasters and flat screen TVs, my family enjoyed a nice relaxing day at home and a fabulous Thanksgiving dinner together. During the day we hung out, watched football, exercised and decorated ginger bread men. I managed to turn my gingerbread man into a bunny. Then in the evening we are ourselves stupid.

There were 18 of us and we ate delicious turkey, mashed potatoes, green beans, stuffing (my favorite), rolls and pie (my other favorite). We all toasted Katy for being so smart and getting us all together, and my mom and Stanis for making great food. It was me, Mom, Dad, Katy, Evan, aunt Celia, Austin, Duffy & her family, Stanis & Bob and Robby and his family. I loved getting to spend time with everyone and it made me so happy and content.

Saturday Dad, Kate, Evan and I went out to see my dad’s buddy Mario and Mario’s wife Jenny. They live in Vally Mills, which is close the Waco, and they are the nicest, happiest people I have ever met. They don’t have much, but they are always willing to share a smile, laugh and anything else with everyone they meet.

Vally Mills is way out in the boonies. The ranch is a great place to go and relax and is made extra super cool because it is covered in 35+ million year old fossils. You just walk around and can pick fossilized sea creatures off the ground. If you are really lucky, you can also find old Comanche arrow heads. I am a cheap bastard and have decided that everyone is getting free dusty old sea creature shaped rocks for Christmas. 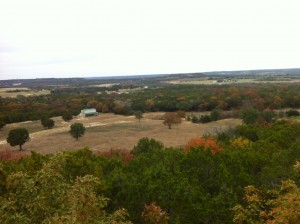 We spent the afternoon waking around fossil hunting and the evening eating BBQ, drinking beer and hanging around a bonfire. Mario is so funny and has an endless amount of hilarious stories about my dad. I loved just hanging out.

Sunday morning Jenny made a giant breakfast spread and we once again stuffed ourselves stupid. I am going to come home with an extra 20 pounds. Not sexy, but I have enjoyed every meal that contributed to it.

After brunch there was more fossil hunting and football watching until it was time to return to Big D.

Sunday night a large group of us went to El Fenix for dinner. I do not like Tex-Mex, so the food I can rate as mediocre at best, but the restaurant gives you unlimited delicious chips & salsa and tortillas. I am normally not a huge fan of chips, but the El Fenix tortilla chips are amazing. I had the taco salad for dinner. There was too much sour creme and I asked for the dressing on the side, which they did not do, so the salad was a little gross. I have had worse though.

That about sums it up for my Texas vacation. On Monday I flew home, but nothing exciting happened there. I really enjoyed my time down in Texas and I can’t wait to get back there.